Skip to Content Jump to Main Navigation Skip to Search

You Are Here: Hybrid-Electric Power Train

Hybrid-electric power trains are drive systems with more than one power unit; however, the currently discussed vehicles have at least one electric engine with associated power electronics, a direct-current voltage transformer, and one or more electric energy accumulators additionally to the combustion engine as main components. Depending on the level of hybridization, i.e. amount of installed electric performance and size of battery, many advantages can be achieved compared with conventional drive concepts.

Such, there are options of combustion engines with start-stop, start-up support via electric machines (boost), retrieval of braking energy (recuperation), and merely electric long-distance driving with plug-in-hybrids. Additionally, the combustion engine operating points can be shifted to consumption-favorable areas. Thereby, the efficiency improves, emissions are lowered, and the drive-dynamic, especially with downsized engine in the lower speed range, can be improved. 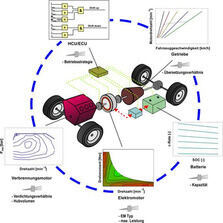 To exploit the advantages of hybrid-electric power trains to the fullest, the layout of the hybrid components and operating strategy during the development process is particularly important. Due to a number of power train components, an optimized layout of the overall system cannot be mastered with conventional methods.

In the course of the research projects “Optimized Layout of Gasoline Engines in Hybrid-Electric Power Trains (FVV 863)” and “Investigation of the Optimized Layout of Hybrid Drive Trains under Real-Term Conditions (FVV 1011)”, which were funded by the Research Association for Combustion Engines (FVV), a new approach to optimize gasoline engines for hybrid- electric engines as well as the power train components was developed at the VKA in cooperation with the automobile-industry. Hereto, a combination of a simulation of the hybrid-electric power train and numeric optimization process was used. The optimization of the power train and operating parameters happened through the method of static test planning (Design of Experiments). By the given combustion engine and power train combinations, and with the help of the calculated fuel consumption, an optimal combination can be found.

This approach, which was developed from prior research projects to passenger car drive trains, is applied to commercial vehicles with the research project “Alternative Commercial Vehicle Drive for Trucks and Busses (Start-Up) – Clean and Energy Efficient Road Haulage”. Furthermore, it is developed to the changed requirements of commercial vehicles. These are especially changes from a combustion engine to Diesel engines as well as the changed gear and the higher loads due to increased weight. The test-cycles of the layout differ from the passenger cars as well. Furthermore, the electric components can be dimensioned more efficiently.

The research project start-up is funded by the Ministry for Innovation, Science, and Research NRW (MIWFT). The significant advantages of hybrid propulsion – especially in city traffic – offer high potential to reduce consumption while simultaneously improving the drive dynamics, which will probably be reflected by the increasing market share of hybrid concepts. 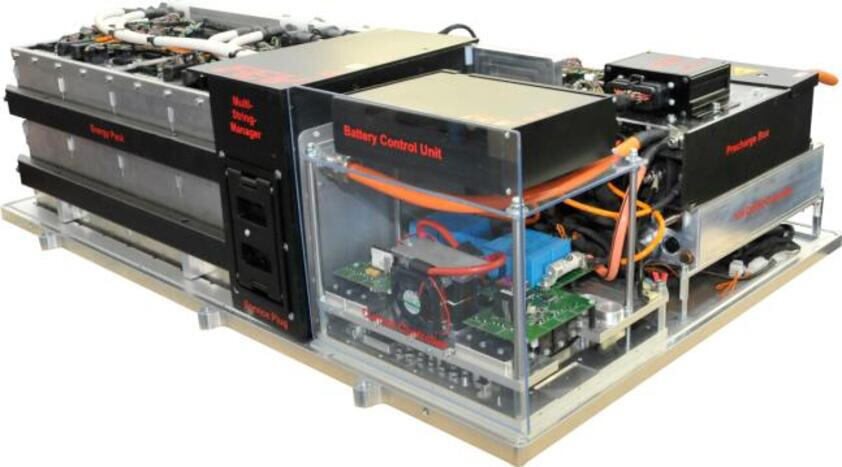 Additionally to system layout and simulations, the VKA created and realized numerous hybrid components. For instance, with the combined battery, the VKA introduced in cooperation with the FEV Europe GmbH an innovative and cost efficient battery concept, which enables an individual configuration of the battery combining energy- and performance modules.

The current flow between energy and performance modules is realized through a cost efficient flow controller. The combined battery uses an optimized charge strategy, which offers advantages concerning the length of life. Further, it generates cost advantages of 12% and a weight reduction of 18% when compared to conventional battery technologies. The flow controller allows a combination of different cell types, while simultaneously enabling a layout of module systems for a great range of applications with potential scale effects. With the newly constructed CMP, the VKA has the possibility to test all components of a hybrid-electric power train individually as well as in conjunction.

Due to the complex interaction of the introduced components of a hybrid drive, the control and coordination of the components are highly important. The control of the mechatronic overall system is assumed by functions, which are translated to control units, generally known as function development. To fully exploit the available potential of the hybrid-electric power trains, employees of the VKA address the function development of all components. Additionally to the engine control unit, the battery control unit, the inverter, and the transmission control unit are components.

Besides the component control, the component coordination is very important. It is realized within the hybrid control unit via drive trains. Hereby, the power split is realized onto the available energy converters with regard to the component limits to implement the driver’s wish. Because of the increased degree of freedom, this is a complex issue, which significantly determines the system efficiency. Therefore, the predicative energy management is a subject matter of current research projects at the institute. Hereby, vehicle sensors (e.g. radar, camera) and GPS-map data information about the future track layout as well as the traffic situation are generated using vehicle communication (V2X). This builds the basis for a downstream real-time optimization, which’s goal is to drive the route efficiency optimized.