Skip to Content Jump to Main Navigation Skip to Search

You Are Here: Gasoline Engines


Ottomotor
Video of a gasoline engine

The conventional gasoline engine is identified by spark ignited combustion of a homogenous stoichiometric fuel-air-ratio almost throughout the entire engine map. The load control takes place through the adaption of the filling by a throttle valve, or rather via wastegates during charged operation (quantity regulation). The homogenous-stoichiometric operation allows for a comparably effective and favorable exhaust gas aftertreatment via a three-way catalyst.

Particularly the required throttling of the engine during part load shows a negative effect on the acquirable efficiency. Therefore, next to a reduction in pollutant emissions, especially an increase in efficiency accompanied with a decrease in carbon dioxide emissions of the gasoline engine are addressed with research and development at the Institute for Combustion Engines (VKA).

Recently, the reduction of the displacement, also known as “downsizing”, in combination with turbocharging the engine has become the most favorable concept of many automobile manufacturers that meets the expectations of reducing fuel consumption and carbon dioxide emissions. By shrinking the displacement, favorable brake mean effective pressures are reached for the specific fuel consumption already at low torque demands. The reduced torque reserve of the smaller displacement is usually compensated by raising the boost pressure via charging. Variable inlet and outlet valve timings represent state of the art with charged gasoline engines.

This variability enables a rise in efficiency by dethrottling via an intern exhaust gas recirculation of the part load as well as via a shortening of the compression stroke compared to the expansion stroke. The latter may also be realized via a shortened or lengthened valve event. Furthermore, variable valve timing allows for an increased low-end torque in scavenging operation as well as reduction of the residual gas content and therefore also of the knocking tendency in the area of full load. An additional decrease in knocking is achieved by the internal cooling of the direct injection (DI) and enables a further raise in efficiency when combined with an increase of the compression ratio.

A great potential to decrease the knock propensity is water injection, especially when it is injected directly into the combustion chamber. The cooled external exhaust gas recirculation (EGR) can also be used to decrease the knocking tendency of charged gasoline engines at full load as well as part load. High system complexity and demanding requirements on the charging unit in the area of full load are the most challenging topics of cooled external EGR at gasoline engines. 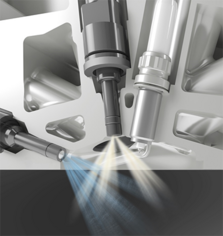 Another reduction of the fuel consumption is possible through a lean combustion operation. Thereby, the gasoline engine is operated with excess air. With lean combustion operation, it can be differentiated between a homogenous and stratified operation. With the homogenous operation, the burning rate decreases with increasing enleanment. Therefore, more fluctuations occur during the combustion process between the individual engine cycles. With the stratified operation, the engine is globally lean operated. However, in the area of the spark plug, a local ignitable mixture exists. Thus, special requirements in regard to the mixture formation system occur, since it has to provide an ignitable mixture at the spark plug for every operation. Therefore, this procedure has only been used with part load yet.

Another challenge with lean combustion operation is the exhaust gas treatment. A sufficient conversion of the nitrogen oxide emissions via a 3-way-catalyst is mostly not possible. Thus, expensive exhaust aftertreatment systems are needed, for instance a NOX adsorber catalyst or a selective catalytic reduction (SCR) with urea injection. To avoid those systems, combustion processes are analyzed with which the nitrogen oxide emissions are already on a low level. Hence, approaches like the controlled auto ignition (CAI) in part load range exist, which decreases the peak temperature of the combustion via further charge dilution with internal residual gas recirculation. On the basis of these challenges with lean combustion operation, these concepts are only marginally pursued with large-scale-productions. 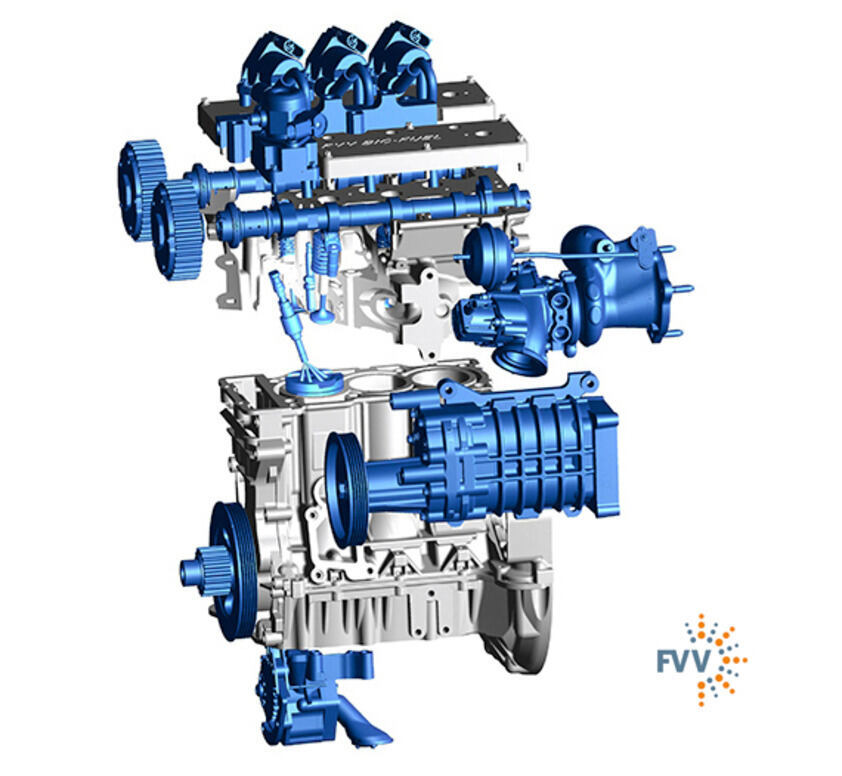 Additionally to the use of conventional gasoline fuel, alternative fuels are greater engaged in gasoline combustion processes. Currently, many manufacturers already offer gasoline engines, which can be operated with compressed natural gas (CNG) or liquefied petroleum gas (LPG) next to gasoline. Advantages of an operation with CNG or LPG are higher antiknock properties as opposed to conventional gasoline fuel. However, disadvantages occur with the achievable volumetric efficiency of the engine, since these fuels are usually introduced into the intake manifold. Thus, the analysis of procedures that directly inject CNG and LPG into the combustion chamber is an examined field of research. Additionally, fuels, which are produced in regenerative ways and are tailor made for gasoline engine combustion, are investigated as well.

At the VKA, a multitude of F&E projects researches fundamental findings in the area of gasoline engines as well as of the operation of alternative fuels.

The content embedded in this web page will take you to web pages provided by the Google-operated video sharing platform YouTube – YouTube, LLC, 901 Cherry Ave., San Bruno, CA 94066, USA. Invoking this content makes it possible for YouTube to determine your IP address, the language setting of your system, and a number of browser-specific details.

YouTube uses cookies and tracking tools. Information on YouTube's data processing activities and the purpose of these activities is available and can be viewed at YouTube.

By clicking the "accept" button, you agree to use the content provided by the platform under the conditions outlined above.

Please note that you give your consent for a one-time use of the web page only. When you visit the page again, you will again be asked for your consent.

The content embedded in this web page will take you to web pages provided by the Vimeo – Vimeo LLC, 555 West 18th Street, New York, New York 10011. Invoking this content makes it possible for Vimeo to determine your IP address, the language setting of your system, and a number of browser-specific details.

Vimeo uses cookies and tracking tools. Information on YouTube's data processing activities and the purpose of these activities is available and can be viewed at Vimeo.

By clicking the "accept" button, you agree to use the content provided by the platform under the conditions outlined above.

Please note that you give your consent for a one-time use of the web page only. When you visit the page again, you will again be asked for your consent.